We had barely begun our walk down the long corridor that leads to the ballrooms when I spotted it scurrying along the floor.  “Look!”, I said to my teenage son, “A horta!”.  He knew 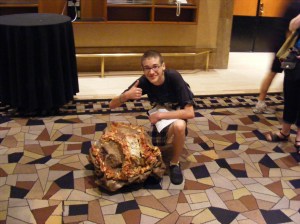 the reference immediately and bent down to have a close look at it.  A resourceful fan had constructed it so that it could be remote controlled from a few feet away and, except for being a tad smaller than one might expect, it was a very faithful recreation of the silicon-based life form from the TOS episode “The Devil in the Dark”.  Two things occurred to me as the horta encounter transpired: this was going to be a good first day at Creation Star Trek 2011 Las Vegas and my son, attending his very first Trek convention, reminded me of myself 38 years ago attending mine.  In fact, my first day at the New York City International Star Trek Convention in 1973 began very much as this one did – with a homemade horta on the hotel carpet.

There are, of course, some significant differences between the Trek conventions of the early ’70’s and those of today; the sizes of the crowds and the prices being among them. Nevertheless, all the great things I remember from being a kid at my first con were still evident (and still great!) in 2011.  The array of stars was larger than any I’ve experienced at past cons and many of them were wandering around among the fans or seated in the dealers’ room so they were incredibly accessible.  The variety and amount of merchandise for sale would leave any Star Trek fan salivating.  The number of people adorned in costumes was mind-boggling and many of the uniforms and alien outfits were really well put together.  Most of all, however, the people at Star Trek conventions are just so friendly, outgoing, and positive that you can’t help but enjoy being around them.  To me, the interaction with other fans is one of the most enjoyable aspects of going to these things in the first place.

As for the activities in which we engaged, they were many and varied. We got to see Walter Koenig on stage in the morning.  We met in-person and spoke at some length to Grace Lee Whitney, Tim Russ, Mariette Hartley, John DeLancie, Brent Spiner, Jonathan Frakes, Don Marshall, and Stephen Manley (all of Star Trek) and Richard Hatch and Herb Jefferson (of the original Battlestar Galactica).  We picked up some cool stuff in the dealers’ room and bid on some items at the auction.  My son’s tribble was a great conversation piece, especially with fans dressed as Klingons – one of them even “attacked” it!  We saw the TOS blooper reel and laughed out loud watching it. We laughed more when we took in Jonathan Frakes’ stage appearance – he is hilariously entertaining.  We got autographs from him and from Brent Spiner.  All in all, I’d say those things made for a good day…then there were the other fans who helped make it a great day!

There were people in attendance of all ages, colors, shapes, and sizes.  Some of them came from a few miles away and some from other parts of the U.S. and even from other 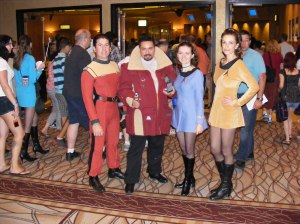 countries.  There was no shortage of homemade costumes on display as well, many of which were outlandish and all of which were very creative. The common denominator in all these cases though was the great joy in meeting and talking with all these folks who were beyond friendly.  They made me feel comfortable, which was nice as I hadn’t been to a Trek con in over 15 years and they made my son comfortable, too.  I think it’s safe to say that he will look back on this day with fondness, just as I do when reminiscing about my first experience at a Star Trek convention.  In many ways, I was enjoying being a kid again vicariously.  It was like we spent a day back in 1973 at the International Star Trek Convention…and we’ll do it again tomorrow.  I guess tomorrow really is yesterday!

1 thought on “Tomorrow is Yesterday”